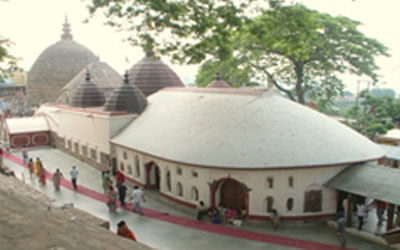 Today arrive at Guwahati airport, received and transferred to city, enroute we will visit Kamakhya Temple, later check into hotel, after refreshment in evening we will visit Srimanta Sankardeva Kalekshetra, inner and overnight stay in Guwahati.
Day 02: Guwahati – Balipara 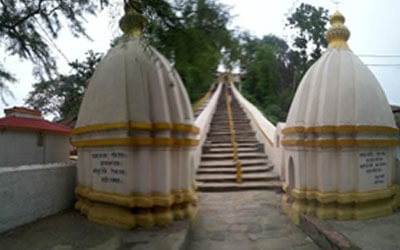 Today after breakfast we will drive to Balipara ( 220 kms / 05 hrs drive), enroute we will visit Sualkuchi Village ( the silk weaving village of Assam), also visit Hajo village and temples, later after a traditional Assamese lunch we will proceed to Balipara, reach Balipara and check into Tea Bungalow, evening at leisure and overnight stay.
Sualkuchi Village: 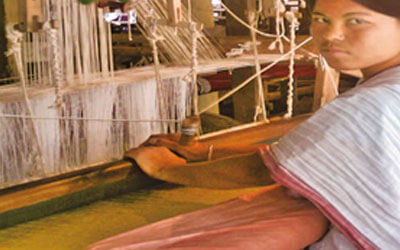 Assam is the home of several types of silks, the most prominent and prestigious being muga, the golden silk found exclusively in this state. The main centre in Assam for silk-weaving is Sualkuchi. The texture is delicate, with dainty designs and natural colours. Sualkuchi is a medieval town and was perhaps the first urban settlement in Assam. Sualu is the tree from which the leaves are fed to the Muga Silkworm Antherea assama; and Kuchi means cluster. Every household in Sualkuchi is involved in the silk trade. Before the advent of cheap calico textiles, silk (either raw or wrought) was an important article of production.Women of all strata of Assamese society (even today) from the Queen downwards used to weave at their loom.The weaving tradition in this village can be traced to the 11th century when king Dharma Pal, of the Pal Dynasty, sponsored the craft and brought 26th weaving families from Tantikuchi to sualkuchi. The village took shape as a weaving village when the SHAMS occupied Sualkuchi defeating the Mughals in the 17 th century. Assam silk denotes the three major types of indigenous silks produced in Assam; golden Muga, white Pat and warm Eri silk. The Assam silk industry, now centered in Sualkuchi, is a labor intensive industry.
Day 03: Balipara 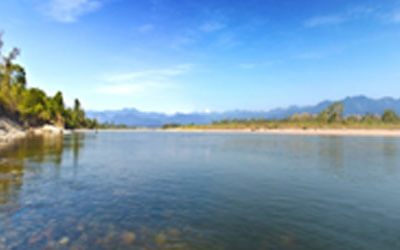 Today after breakfast we will drive to Nameri and go for a boating ride ( rubber dinghies ), along the Nameri National Park ( 02 ½ hrs), reach the end point near Eco Camp, then you will be transferred to Wildmahseer, after lunch and refreshment go for a walk along the Tea garden and explore the Assam Tea History. Evening at leisure and overnight stay.
Day 04: Balipara – Kaziranga National Park
Today after breakfast we will drive to Tezpur ( the land of blood, as there was a fierce battle between Lord Krishna and Shiva so it is called), explore the ruins of the Ban Dynasty, later you will be transferred to Kaziranga National Park (100 kms / 2 ½ hrs drive), reach Kaziranga and check into hotel, after refreshment if you wish then we go to explore the Assamese village, back to hotel. Evening at leisure. Overnight stay at Kaziranga.
( If the flight land early then we will have time to explore the Mishing villages in Kaziranga)
Kaziranga National Park. 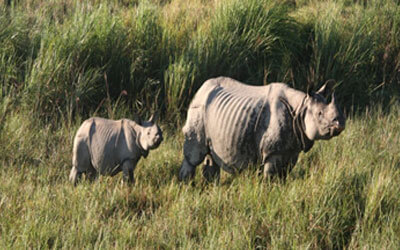 Kaziranga National Park is one of the prides of India. Kaziranga is the place where the nature unwinds its pristine form in millions of hues, where wildlife roams fearlessly, where man and nature meets together. This prestigious national park of India is situated in the north eastern part of the country in the district of Golaghat and Nagoan in the state of Assam. Let’s go back to the beginnings of the twentieth century in the year of 1904 when this beautiful wildlife sanctuary was created, and about 68 years later it was declared as National Park by the Government of Assam.

It is noteworthy to mention that it is the host for two third of world’s population of endangered Indian one-horned rhinoceros and also declared as a tiger reserve in 2006, holding the highest density of tigers in the world. The park is also a domicile for large breeding inhabitants of Elephants, wild water buffaloes and Swamp Deer. It has been declared as a forest reserve in the year of 1908 and wildlife sanctuary in the year of 1950. Covering an approximate area of 430 square kilometers, Kaziranga was declared as a World Heritage Site by UNESCO for its unique natural environment in the year of 1985. Apart from this, the park has been identified as an important bird area by Birdlife International Society as it is a home to various species of migrating and inhabitant birds. Situated on the banks of river Brahmaputra, the sanctuary is blessed with the four different kinds of vegetation. The Tropical moist mixed deciduous forests and tropical semi-evergreen forests is marked by the 41% of the tall grasses, 29% open jungle, 11% short grasses and rest is covered with the rivers and the water bodies. Its breathtaking array of flora and diverse fauna adds value to the scenic beauty of the park.
Day 05: Kaziranga 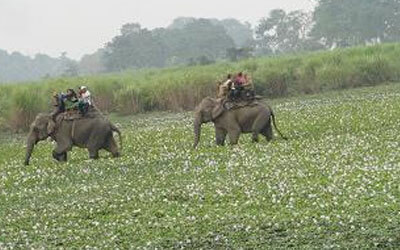 Today you will go for safaris and elephant ride inside the national park. Early morning go for an Elephant ride ( timing 5:00 AM/ 06:00 AM/ 7:00 AM) then return back to the lodge and after breakfast go for a Jeep Safari (timing 8:00 AM / 9:00 AM) for 03 hrs, after the safari come back to lodge. After lunch and refreshment go for another Jeep Safari in the Western/ Central range of the park (timing 2:00AM / 3:00 AM) for 02 ½ hrs ( also depending on the sunset as in winters the sun sets early in Northeast India), evening at leisure. Overnight stay at Kaziranga.
Day 06: Kaziranga – Majuli Today after breakfast we will drive to Nimatighat ( 124 kms / 03 hrs drive), and cross the mighty river Brahmaputra ( 1 hrs), reach Majuli and we will set to explore the Island, at first we visit a small monastery where mask making ( Samuguri Satra) is done from generation to generation and its famous all over India, after that we will visit the Auniati Satra and after lunch we will visit Garmur Satra. Satra are Vaishnavaite monasteries. Check into accommodation and evening hear the legends and stories from a native of Majuli. Overnight stay in Majuli. Majuli is the largest fresh Water mid-river deltaic island in the India. It is situated in the upper reaches of the river Brahmaputra in Assam within the latitude of 26045' N – 27012' N & longitude of 93039' E – 94035' E with mean height of 84.5 Mt. above MSL. This landmass, with a population of 1.6 Lakhs, majority being tribal, has a very rich heritage and has been the abode of Assamese Vaishnavaite culture. The island is a bio-diversity hotspot and has rich ecology with rare breeds of flora and fauna.
Day 07: Majuli - Jorhat 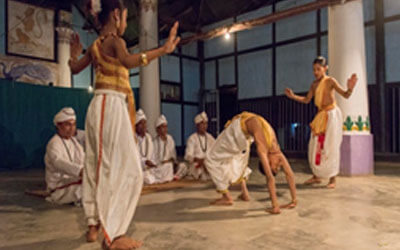 Today we will explore the village of the Mishing Tribes – the native people of majuli, also enjoy a Traditional Satriya Dance show in Uttar Kamalabari Satra by the monks, after an early lunch we will cross the river and reach Jorhat and drive further (10 kms) to reach a Tea Bungalow check in. You will be at your own enjoy and relax in the Tea Bungalow. Overnight stay in Jorhat.
Day 08: Jorhat – Kohima Today after breakfast we will proceed to Kohima ( 215 kms / 05 ½ hrs drive), we will drive in plain road for 3 hrs and the last 2 hrs would be uphills which will start after crossing the Dimapur City of Nagaland( the commercial hub of Nagaland), lunch will be enroute in a resort in Dimapur. On reaching Kohima proceed further to Kisema village – the venue of the Grand Hornbill festival, attend the festival and later drive back to Kohima, check into hotel and overnight stay.

The Hornbill Festival as the ‘festivals of festivals’ came into existence only in the year 2000. It is a deliberate cultural creation of the Government of Nagaland and it came to be celebrated every year from 1st to 10th December. This festival seeks to express the ‘unity in culture’ among all the 17 tribes of Nagaland. The purpose of ushering in a new cultural festival of this magnitude is manifold. The crucial one is that it is an earnest endeavor to promote ‘tourism’ in the State. The Festival is named after the hornbill, the globally respected bird and which is displayed in folklore in most of the State’s tribes.
Day 09: Kohima Khonoma village is located about 20 km from the state capital, Kohima. The village, referred to as Khwunoria (named after the Angami term for a local plant, Glouthera fragrantisima), is estimated to be around 700 years old and is spread over an area of 123sq.km. The total population of the village is about 3000, settled in 600 households. Khonoma is famous for its forests and a unique form of agriculture, including some of the oldest terraced cultivation in the region. The terrain of the village is hilly, ranging from gentle slopes to steep and rugged hillsides. The hills are covered with lush forestland, rich in various species of flora and fauna. The state bird, Blyth’s tragopan, a pheasant now nationally endangered, is reprtedly found here.

Over a hundred years ago, advancing British troops found themselves facing a determined warrior tribe in the highlands of Nagaland. The Angami men of Khonoma, famed for their martial prowess and strategic skills, fought a resolute battle to safeguard their territory, inflicting heavy casualties on the foreign soldiers. The village is recorded to have resisted British rule in the region from 1830s to 1880. Finally a truce between the two stopped further bloodshed, but meanwhile Khonoma village had etched its name into the history of Indian resistance to the colonial invasion. Christianity was introduced in the village in 1890, and today most of the villagers are of this faith.
Day 12: Kohima – Dimapur – Airport – Fly
Today after breakfast you will be transferred to Dimapur airport ( 75 kms / 02 hrs drive).
( Note : In Kohima during Hornbill festival there is a huge traffic jam so one have to leave early to Dimapur to catch flight on time)